Your Personal Ear Trainer that Listens to You

How I discovered muscle memory

First, let me clarify: Muscle memory is not an exact scientific term. It is not memory that resides in the muscles, nor is it a specific location in the brain. I will use the term "muscle memory" to describe a storage place for a sequence of coordinated muscle actions.

I was a dreamer in school 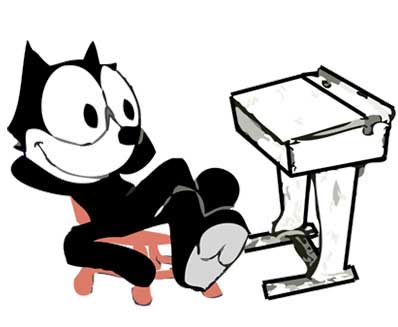 When I was about 8 years old, I was afraid of my teacher: She used to give a pandy on the palm for disobeying (Pandy = A stroke on the open palm of the hand with a cane or strap given as a punishment in school).

One day, - I did what day-dreamers do -, I was looking out the window, while she was explaining something. All of a sudden the teacher called my name, focused me and asked me to tell her what she had just told. I was shocked to death: Falling out of my dream: This was the real world. What could little Felix do, to avoid punishment? I tried to travel back in time. What was going on while I was looking out the window? I somehow managed to go back in time with my thoughts and could feel the words passing by. It was just like I had stored the muscle movements of what I had heard somewhere in memory.

So, not knowing what to do to save my life, I just let this muscles move and repeated the last sentences she had spoken. It may even have sounded a little bit like her. During this blind repetition, I started to realize the meaning of the words I was saying.

Of course the teacher realized that I did not know what I was saying - that I was only mechanically repeating her. So she asked me about the meaning of the sentence. But, hey, I have won some time, and during the repetition, I got an idea of what she had said. So, I felt like on a winning road and in a real effort, I went mentally through the words again and was able to confirm the meaning of the sentence. So the sentences I spoke contained still a lot of repeating, but did hit the mark of the meaning.

My day was saved, the teacher somehow was surprised, perplexed and continued the lesson. She did not expect me to be able to give the right answer, since she must have observed me for a while day-dreaming. Unfortunately, I do no more remember the topic about what this lesson was, but I remember that at that time, I felt like being a hero: I saved my life (through muscle memory)!

Muscle memory and the voice

Muscle memory has been used synonymously with motor learning, which is a form of procedural memory that involves consolidating a specific motor task into memory through repetition. When a movement is repeated over time, a long-term muscle memory is created for that task, eventually allowing it to be performed without conscious effort. This process decreases the need for attention and creates maximum efficiency within the motor and memory systems. Examples of muscle memory are found in many everyday activities that become automatic and improve with practice, such as riding a bicycle, typing on a keyboard, typing in a PIN, playing a melody or phrase on a musical instrument, playing video games,[1] or performing different algorithms for a Rubik's Cube. (http://en.wikipedia.org/wiki/Muscle_memory).

You can find more samples for muscle memory on the internet, and you can also find opinions that muscle memory is non existent. Most examples are of course about real movement: E. g. How a child learns to walk. Now, if it exists or not is irrelevant in this discussion. In the end it may be just neurons and synapses that store our information. For the reminder of this page, - in lack of a better description -, we assume that muscle memory is a place, - or several places -, where the sequence of muscle movements for a certain action gets stored and can be recalled for execution.

If you do active sports, you have probably noticed that when watching your sport on the TV that your muscles want to go along with the action on the TV? That is watching is more than just seeing: It is believing: Your brain goes exactly through the same cognitive process as if you were doing the actual movements. You fever with your favorite players. Your muscles may even do tiny movements and fool your brain with feedback as if you were doing the task yourself.

Most of us don't care about the process of how we speak: We just do it. But the brain has to precisely coordinate lips, jaw, tongue and larynx (voice box) and air flow. Speech researcher speak of coordinated motor patterns. A motor pattern is defined as "A particular sequence of muscle movements directed to accomplishing an external purpose" (Oxford Dictionary of Sports Science and Medicine). As complex as the voice may be, behind the outcome of an effort to speak are simply muscles. It is such an automated process that we don't even realize that anymore.

From the introductory story, we can conclude that a similar process goes along when we hear something. We translate the words we hear into imaginary muscle movements. This is not surprising, since the brain was built to control muscles in the first place. These tiny muscle instructions for the reproduction of the heard sounds create stimuli which can then be interpreted by other cells. These stimuli can then be used to associate sounds to words. So, in retrospect it looks to me, like we have a short term memory that just saves the instructions to reproduce the sounds. Or at least to reproduce the important aspects of the sound: The words. The brain seems to analyze the sound and then store it, - in a condensed form -, as different attributes. At least I had the impression, - when the shock in the school hit me -, that just the muscle instructions were stored and available to me. In this way, I was able to reproduce the sentence. The interpretation came as a second step, when I was repeating the sentence. Since I dreamed a lot in school, I must assume that the heard things get processed during the night.

Muscle movements are of vital significance. It is one of the first things we learn to control. The learning process therefore must be easy. One thing we can observe is: We get immediate feedback (e. g. it hurts when we fall). Therefore we can conclude that feedback is essential in the learning process. For the voice this feedback comes through the ears from two channels: the bones and the air. So the voice may not be as vital as the other muscles, over time the voice became more and more important for survival. The mean was fast communication to overcome distances and allowed for coordinated hunt.

Today the voice is the most important key to success. We communicate, discuss, spread and conserve knowledge in the form of books - a further development of the voice. Pitch also conveys information. However, we can only produce a limited range of pitches. Nevertheless, producing pitches and recognizing pitches are strongly interrelated. Read more about the relationship between muscle memory and pitch memory: A possible explanation on How we remember sounds and pitches.